Of all of Meta’s current offerings, its ‘Horizon Worlds’ VR creation platform provides the most indicative view of its future metaverse plans.

And starting this week, more people will be able to share in that vision, with Horizon Worlds being launched to users in the UK, in addition to the US and Canada.

As shown in the video above, Horizon Worlds enables users to create their own virtual spaces, with a range of 3D objects and tools that they can use to build interactive environments.

Meta launched Horizon Worlds with all users in the US and Canada in December, and it’s now expanding that to the UK, before opening up access to all EU users in the coming months.

“From the very beginning, we’ve envisioned Horizon Worlds as a creator-friendly VR environment featuring top tier social world-building tools. And by developing those tools and listening to and incorporating feedback from creators, that’s just what it is. But we’re always working to make it even better. For example, last month we launched our first asset library, a collection of pre-made items that creators can use any time they want. Plus, we’ve also committed $10 million USD to help creators get their worlds off the ground.”

The asset library will play a big part in the next stage of the metaverse, with Meta looking to help brands build 3D models of their products, for improved eCommerce display, which can then also be made available in Horizon Worlds for usage in user projects.

That will provide new promotional opportunities in this emerging digital space, which, as noted, gives us the clearest indicator of what the metaverse will be like, in Meta’s current vision at least, as a consumer tool.

We’ve already seen some indications of the marketing implications in this respect, with brands like Wendy’s creating their own, branded environments in Horizon Worlds, inviting users to come and engage with their virtual products and activations.

That, again, is where the metaverse is headed, with individuals and brands alike able to create Minecraft-like interactive spaces, where users can be fully immersed in VR – or potentially via other means as well – into their creations.

Though it’s fairly basic right now, in its early stages of its development. Eventually, as Meta CEO Mark Zuckerberg has shown, the metaverse will incorporate a wide range of fully-immersive and interactive environments, that will enable you to create and explore all manner of new worlds, beyond anything that you’ve ever experienced.

We’re not close to that yet, in terms of fully functional, interactive, avatar-led engagement in these VR worlds. But eventually, that’s where Meta is headed, and if you wanted to get a taste of what’s coming, and what Meta views as the next evolution for brand Pages, Horizon Worlds is your best current indicator on this front.

But VR engagement also opens up new forms for harassment and abuse, in an even more enclosed and immersive space. Which is another element that Meta needs to address.

On this front, Meta has also announced the addition of ‘Voice Mode’ in VR, which will enable users to choose if they want to hear other users speaking within he VR environment. 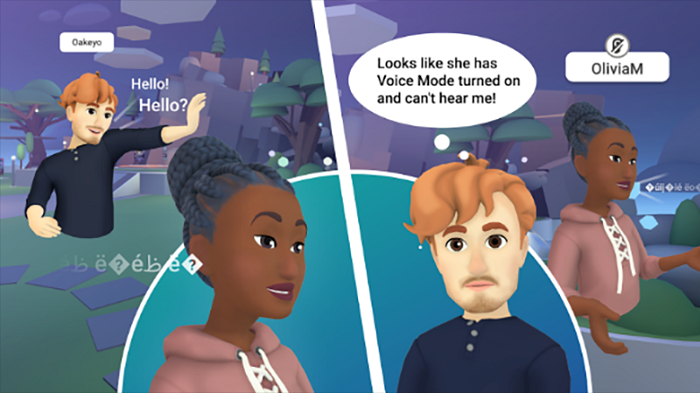 As explained by Meta:

“[Voice mode] will allow you to choose how you hear people who aren’t on your friends list, including the option to not hear unwanted conversations at all. By default, you’ll hear all nearby users at the same volume, but with Voice Mode, you can easily switch to Garbled Voices, in which non-friends’ voices come across as unintelligible, friendly sounds.”

As shown in the above image, when a user selects ‘Garbled Voices’, strangers will see an indicator that you can’t hear them in the space. Users will be able to change this setting at any time, but it provides another safety measure to help protect users in VR, where already there have been some disturbing instances of abuse, even in its early, rudimentary state.

Late last year, a beta tester for Horizon Worlds reported that she had been groped by a stranger in VR, while another experienced ‘gang rape’ by male users in the space, which she described as feeling ‘very real’.

Those incidents prompted Meta to add a new ‘personal boundary’ feature, which enables users to keep others at a distance from their avatar.

Meta’s also now added new pop-up warnings which are displayed to people who behave disruptively in the VR space. 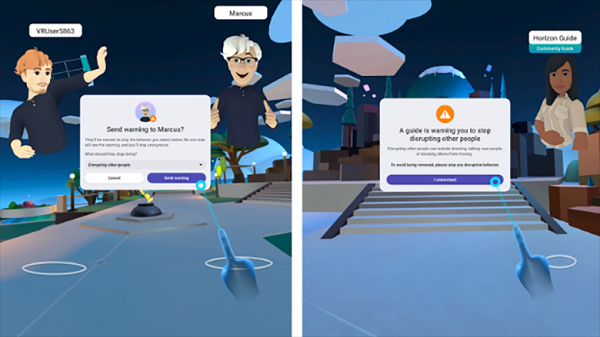 So there are measures in place to mitigate the risks, to some degree. But it does seem like this could become a far bigger concern for the platform moving forward, and one that Meta needs to ensure is fully addressed before implementing a broader roll-out of its metaverse push.

Will that actually happen? Meta doesn’t exactly have the best history in regards to addressing potential problems like this before they become bigger concerns, and it would surprise no one if Meta pushed ahead with the expansion of its metaverse vision over anything else, including the safety of users.

Which, in some ways, seems to be already happening, with the expansion of Horizon Worlds to the next stage – though Meta will be hoping that its developing safety tools will be enough to provide adequate protection for users in the virtual space.